Welcome at this site of a Dutch "rockabilly girl". It started when I was fifteen, extremely bored by disco. Desperately seeking for something else, I stumbled upon the old vinyl collection of my dad.

Vinyls with Bill Haley, Buddy Holly, Elvis, Roy Orbison, Johnny Cash, The Everly Brothers, The Platters, Connie Francis and some more collections. That was such a breeze! To me this was the best music ever! I wanted more!

A radio program in the Netherlands called "De rock & roll methode" was my inspiration to get to know more artists. My favoriete oldtimers are Johnny Burnette Trio and Eddie Cochran. But I also love rythm and blues like Wynona Carr and Wynonie Harris, doo wop like The Five Keys and The Monotones. There was and is so many to discover.

Growing up in the 70’s & 80’s, there were The Rubettes, Matchbox, Long Tall Ernie, Showaddywaddy, The Darts, Shakin’ Stevens and .... The Stray Cats. Wow these guys were so rockabilly! I still have the Dutch fanclubs first (and only?) magazine from that period.

I found Rockhouse & Nervous Records in a local stores sale: Restless, Blue Cats, Delta’s, Ricochets and Guanabatz were next to spend my pocket money on. Neo-rockabilly and psychobilly came into the collection. I’m a big fan of the right-up bass ever since!

The first festival I went to was at Eindhoven: the Rockhouse meeting had Joe Clay and the Flying Saucers on stage. Since then I bought many vinyls, 45’s, cd’s and our collection holds swing, jive, rock & roll, rockabilly, surf, ska, neo-rockabilly and psychobilly. I’m a great fan of Restless and The Go Getters. But Eddie Cochran and The Johnny Burnette Trio will allways be favorite.
Thanks Dad, for your great collection of rock & roll music, with this music I’ll never get bored!!!

In retrospect it all started with this website. Version 1 was made with a WYSIWYG-editor (What You See Is What You Get). I noticed that the things I wanted to do, couldn‘t be done with this program. Also I wanted to know how things work. So back to basics by studying HTML and CSS gave me the knowlegde to start version 2 of Rockabeppie. After that I started with Php/mysql and that became version 3. This is the 4th version of this website.

So I became a web-, frontend developer. Working with big applications for travelagencies, carbrands and also building smaller websites for retail and local business. Working with Visual Studio, MVC, css3, html5, bits of Javascript. It’s the combination of tech and graphic output, that is still very compelling to me.

Now 3 years later, it is early 2019. After problems with my health, I concluded that continuing to work in a company in frontend development would be difficult. To stay up to date became quite difficult. In addition to concentration problems and pushing myself too much, I had to think hard, what to do next.
I have decided to work part-time and keep making websites as a hobby. This is good for now. 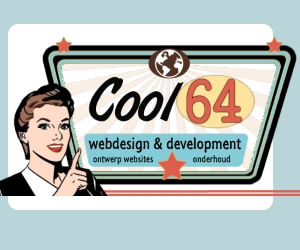 Found recordings from the previous century (duh).
Hidden in an old box filled with cassette tapes. Between the many compilations and recorded radioshows, live from the Cruise Inn: The 3Ronnies and The Black Cats, way back like 1980 something...

Do you recognis the singer of the Black Cats? It is Richard Jordan (El Rio Trio, High Five Four) The other members were Paul Li La Ling, Edwin Verbeek and Dennis Kneulman. The Ronnies last names are Zevenbergen, Karrenbeld and Gerritsma.

Armed with the tape, a mini audioset and an-audio-to-desktop-cable I managed to get this preserved digitally. With the permission from Richard, we all can hear this again. 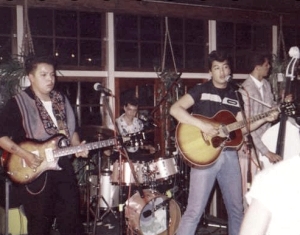